Space has fascinated mankind since long. With the advent of technology, we constantly get to know the answers to our impending question which have baffled us since long. The dark, mysterious space has generated curiosity since forever. With various missions, expeditions taking place every now and then have tried to quench out curiosity thirst. But some questions are still there yet to be answered. The thought of is we alone in this universe has made many scientists sleep less. With every possible effort to find a cure in this path, we still are just clueless. Yet the internet has somehow found its answer, viral answers though. 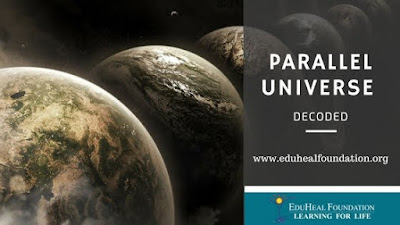 Recently a viral news did its round on net exclaiming first ever evidence of another life in a parallel universe. The recent viral hit came from a press release of the Royal Astronomical Society. The study details the possible origins of a cold spot found in the data probing of cosmic microwave background. This relates to the leftover heat from the moment the universe was formed after the big bang. Some possible definition of this cold spot is the result of the collision of two universes slamming against each other billions of years ago. The press release states that the cold spot found could be a result of the collision of between two universes. If the further detailed study is to be done and some new researched are to be found which support this reason could be the next big step in the mankind’s search for a parallel universe and other life.

There may not be tonnes of evidence to prove such claims due to our limited approach and technology which has limited our reach in the space related issues, although these finding may or may not have its true basis of authenticity. This press release was supported by just one man and his study and hence can't be termed credible to reach to any point. None the less, such findings keep cropping up every time till the time someone renowned refutes them. At last, all we can hope is that whatever we come through be of use to us and not harm us.
www.eduhealfoundation.org
at July 05, 2017 No comments:

Need To Watch Out For ISRO

While ISRO still has a long way to go in the global competition, yet it has been generating positive buzz for itself with its groundbreaking invention which yet put India back again on the global map. India stands apart from other big players. Unlike other countries who carry out such researchers for national purposes, whereas India aims to create newer technology development. Being India's pride, it is in the process of building new and more powerful rockets. The organisation has its eye set towards being counted in the elite ranks of space agencies. Here is few new work on whom we should keep a tab upon.

1. On June 5 India launched the heaviest yet the best ever GSLV MK III satellite by the name of THE FAT BOY. The powerful rocket has the next generation technology and can carry a huge sum of 640 tonnes setting it at par against previous editions. 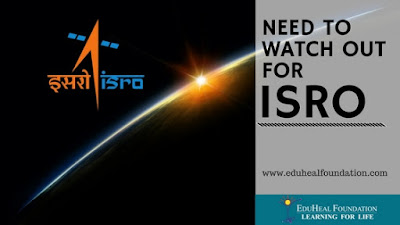 2. India's Mars mission: the ISRO’s Mars mission was a huge milestone the red planet in 2014.  By successful launch and work of Mangalyaan propelled the country's reputation. It is still going strong in Mars orbits gathering information and images.
3. India's rocket launched a record number of satellites: an ISRO aircraft recently blew all the existing records by carrying a record number of 104 satellites in a single journey thus achieving another milestone. The polar satellite launch vehicle beat the previous record of 37 satellites by a Russian rocket in 2014. The PSLV launch brought 88 small satellites to orbit for the silicon valley based earth monitoring company planet along with an earth gazing satellite solely for India.
4. ISRO’s second moon mission: India is all set to launch its second moon mission in 2018. The Chandryaan2 named after its predecessor is planned to go to the lunar surface and collect samples of its dirt.
5. ISRo’s robot on Mars and flight to Venus: ISRO is planning to set its robot on Mars surface and then an expedition to Venus in around 2020’s.  The Mars mission is focused on building a lander and safely bringing it to the Mars surface. The mission involves many complexities hence scientists are preparing and planning to make it a successful one.
www.eduhealfoundation.com
at July 05, 2017 No comments:

ISRO has been scaling the biggest of the mountains ever since its inception. The organisation has made every citizen of India proud by establishing the name of the country in the global world. ISRO has achieved major milestones throughout its journey and has made everyone proud. 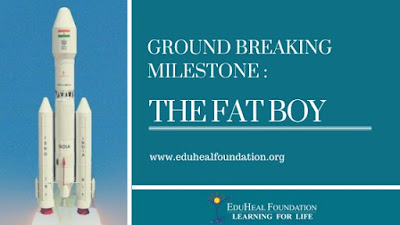 Adding another feather to its master hat, ISRO recently launched a new satellite by the name of the “ THE FAT BOY “ also known as geosynchronous satellite launch vehicle mark III-D1 on June 5. 17:28. It is India's heaviest but also the smallest rocket which went to be ISRO’s next step to establish man’s footprints in space after the groundbreaking success of Mars Orbiter Mission. The rocket was 43 metres high and 4 meters wide. The reason it was named the fat boy was to be because of its humongous capability to carry a load of 640 tonnes, which is almost equal to 200 elephants!. It is a three-stage vehicle with world’s heaviest two solid motor strap-on boosters, a liquid propellant core stage and a Cryogenic Upper Stage (CUS). The new Cryogenic engine uses liquid oxygen and liquid hydrogen as its propellants. It is equipped with next generation advanced spacecraft technologies including indigenous Lithium (Li) ion battery and bus subsystem. This rocket is much more manoeuvrable than other rockets launched in this feature hence making it a marvellous invention till date.

Its development began in early 2000’s while the first launch date was decided to be for 2009-10. Several adversities came through due to 2010 failure of GSLV MK-II. With a passive cryogenic third stage, ISRO finally got its much-needed success. It took ISRO scientists 15 years to master the cryogenic technology. Apart from India, only three countries have previously mastered it- U.S, Russia and China. It is better than its previous editions due to possessing four-tonne class satellites into geosynchronous transfer orbits. Thus the launch will increase India’s capability to carry payloads from the current gap of two tonnes. It is a next generation rocket which is also the heaviest making ISRO self-reliant in launching heavier communication satellites of INSAT-4 class.
www.eduhealfoundation.com
at July 05, 2017 No comments: 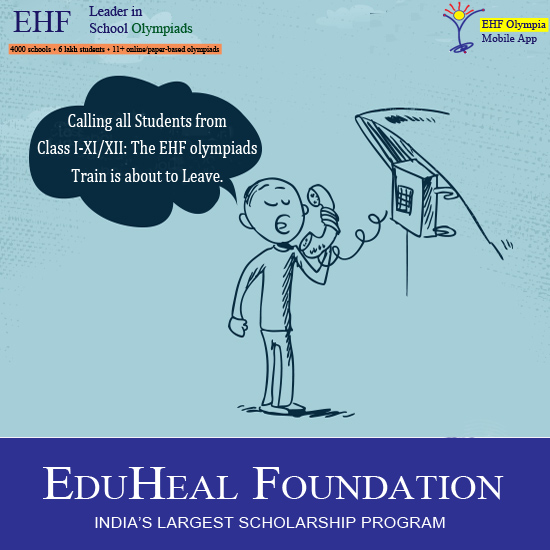